Samsung is working on an in-display front-facing camera

Waterdrop notches are replacing the original big cutouts lately and now we get to see what comes next. 2019 will probably be the year when holes in the displays becoming trendy with in-display cameras and sensors. According to the latest intel, Samsung is already working on that. 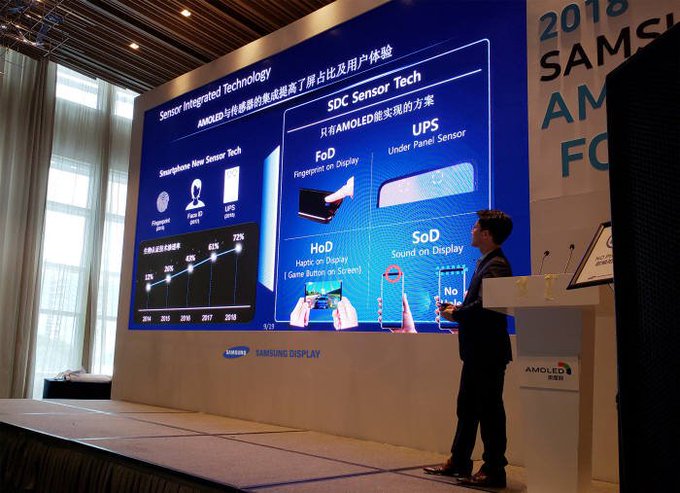 Great news! Samsung established the direction of mobile phone design in 2019!
On October 18th, Samsung Display invited about 20 customers to hold the “2018 Samsung OLED Forum” at the Shenzhen Marriott Hotel in China. At the meeting, Samsung showed a PPT

It looks like the Korean giant isn’t wasting any time and since it’s the only company to stay away from the notches so far (kudos for that), it’s looking into the way of ending the infamous trend. During the 2018 Samsung OLED forum, Samsung went even further by announcing that it’s working on other OLED-related technologies as well. So aside from the UPS (under-screen sensor), the company is also looking into fingerprint under the display, touch-sensitive technology and screen sound technology. But we are particularly interested in the first one that integrates cameras and all kinds of visual sensors under the display.

For now, only a handful of devices are being tested and given that the Galaxy S10 is coming in just a few months and the technology is in its early days, it might not be able to get it. If we go by the latest rumor going around.

#Samsung is working on a new technology trying to hide the front camera underneath the display. My sources told me that there are just a hand full of prototypes using this technology. I don’t think we’ll see this feature in retail phones until 2020, but who knows

If it all goes according to plan we might edge a step closer to having the dream for truly bezel-less full-screen displays materialize.